Only now… how about some science?

Let’s start with a fabulous rundown by Peter Diamandis of the 5 top things we may learn from the newly-launched James Webb Space Telescope! And yes, I was a skeptic about this hugely complex machine. The fact that it appears to be… well… perfect suggests that maybe you ought to consider yourself a mamber of a fantastically competent civilization… whenever our anti-modernist cousins stop dragging at our ankles.

Strange things keep manifesting! (Ain’t it cool?) Pairs and clusters of strands stretch for nearly 150 light-years in the galactic center region and are equally spaced. The bizarre structures are a few million years old and vary in appearance. Some of them resemble harp strings, waterfalls or even the rings around Saturn. But the true nature of the filaments remains elusive.

Giant radio galaxies are yet another mystery in a Universe full of mysteries. They consist of a host galaxy (that’s the cluster of stars orbiting a galactic nucleus containing a supermassive black hole), as well as colossal jets and lobes that erupt forth from the galactic center. Now, an utterly humongous one has been found with radio lobes reaching 5 megaparsecs.

An excellent article about why black holes appear to spin so fast – via conservation of angular momentum – that the edges of their ergosphere’s may approach the speed of light.

And meta cosmological — If the physics theory of cosmological coupling is correct, the expansion of the universe causes black holes to gain mass.

And even more meta! “A spiderweb of wormholes could solve a fundamental “information paradox” first proposed by Stephen Hawking.”

2020 XL5 is an Earth Trojan — an asteroid companion to Earth that orbits the Sun along the same path as our planet does, only 60 degrees ahead at L4. These are far more rare than the large numbers collected 60 degrees ahead or behind Jupiter. Over a kilometer wide, it is speculated as a potentially useful base (especially if the Type C asteroid contains volatiles like water)… but also as a place we ought to scan for “lurker” interstellar observation probes… as I describe in EXISTENCE.

Large-scale liquid on Mars existed much longer than suspected, according to this Caltech report. Martian salt deposits are often found in shallow depressions, sometimes perched above much larger craters that are devoid of the deposits. MRO data showing shallow salt plains above craters suggests that some wet patches endured rather late, as recently as 2.3 billion years ago. Some of these deposits are on terrain that’s a billion years younger than the ground the Perseverance Rover is rolling across right now.

The European Space Agency said that its Solar Orbiter – which was launched in 2020 on a mission to study the sun – quite by accident passed through this comet’s tail in late 2021. While within the tail, one of the sensors aboard Solar Orbiter measured particles that were definitively from the comet and not the solar wind. It detected ions of oxygen, carbon, molecular nitrogen, and molecules of carbon monoxide, carbon dioxide and possibly water. Visible light images can hint at the rate at which the comet is ejecting dust, while the ultraviolet images can give the water production rate.

Three prominent features on the Kuiper Belt object Arrokoth – the farthest planetary body ever explored, by NASA’s New Horizons spacecraft – now have official names. Proposed by the New Horizons team and approved by the International Astronomical Union, the names follow a theme set by “Arrokoth” itself, which means “sky” in the Powhatan/Algonquin Native American language.

Ice roofed worlds might be a majority of all life worlds. Tidal heating is foremost, but also radioactivity and a weird effect of serpentine rocks relaxing slowly into a lower energy structure!

Ah, balmy Venus: “Venus, our closest planetary neighbor, is called Earth’s twin because of the similarity in size and density of both planets. Otherwise, the planets differ radically… While previous studies suggested Venus might have once been covered in oceans, new research has found the opposite: Venus has likely never been able to support oceans.” Any water clouds that did form fled to the night side, where they did not reflect sunlight (albedo) but did trap in heat. So the place never cooled down. 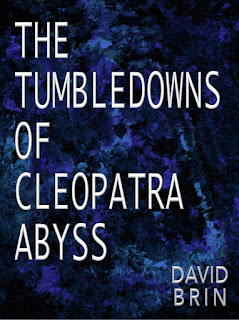 Still, oceans may yet come to Venus!  See how in my novella “The Tumbledowns of Cleopatra Abyss”! On my website and in Best of David Brin stories… my top stuff!

Scientists have identified what appears to be a small chunk of the moon – possibly blasted off it by an impact 100,000 years ago. Kamo`oalewa is one of Earth’s quasi-satellites, a category of asteroid that orbits the Sun passing frequently by Earth. Also a perfect place for an alien observation post!

An interesting theory about the origin of Earth’s water: the solar wind – charged particles from the Sun largely made of hydrogen ions – created water on the surface of dust grains carried on asteroids that smashed into the Earth during the early days of the Solar System, helping to explain how lighter isotopes and hydrogen complemented water arriving from early comets and carbonaceous chondrites.  It also suggests “astronauts may be able to process fresh supplies of water straight from the dust on a planet’s surface, such as the Moon.”

At 100 km across, comet Bernardinelli-Bernstein (BB) is the largest comet ever discovered by far, and it is active, even though farther from the sun than the planet Uranus. The size of comet BB and its distance from the sun suggests that the vaporizing ice forming the coma is dominated by carbon monoxide.  To understand this better, you might go to my doctoral dissertation. Or else the best look at these objects… a novel… Heart of the Comet!