Lifting our gaze to… the Moon? And beyond?


I have some way cool space news to report below. But first a familiar rant. While I disagree with this White House white paper on USA efforts to colonize the Moon, I understand the reasons for issuing this statement.

“It’s very clear that this (the Artemis mission to rush US astronauts to a footprint ritual on Luna) is not just about the research and the science, but it’s also going to be about the economic prospects from the moon,” explained Namrata Goswami, an independent space policy analyst. “Until now, the US has been very reticent to so clearly engage in a manufacturing use of lunar resources.”

Except for one problem – there are no ‘lunar resources’ accessible in the near future except some deposits of polar ice. And lots of poison dust. 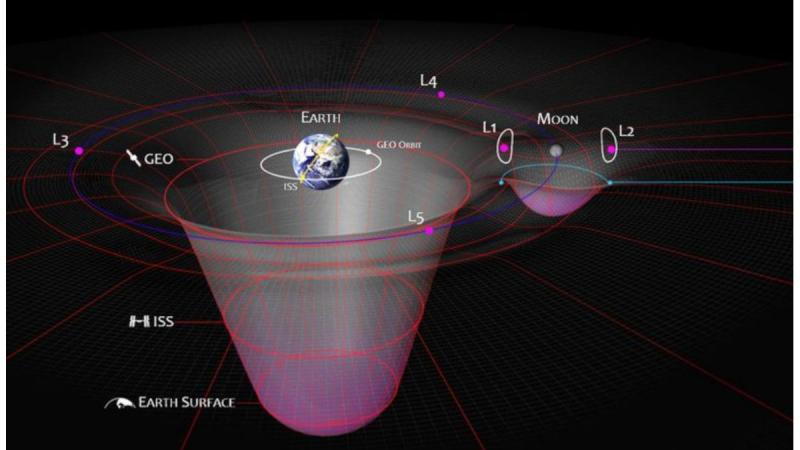 Well well, let me qualify that. I am all in favor of US active leadership in lunar science and robotics!

At NASA’s Innovative & Advanced Concepts program – (NIAC) – we have issued grants to begin studying all sorts of lunar possibilities! Like far-side radio telescopes and nuclear power units, and using regolith to lay bricks for structures and exploring the ‘skylight’ caves that are presumably lava tubes. (These could offer likely the best sites for future human habitats.) And robotically accessing some of that polar ice.

(Please don’t talk to me about ‘lunar resources’ like titanium and ‘helium three.’ It only reveals utterly clueless ignorance. Stop using incantations to substitute for facts.)

So sure, lunar science and robotics, great! And yet, someone has to be the grouch who continues pointing out that there is no real utility to the US/NASA repeating Apollo, planting symbolism footprints on a pretty much useless plain of poison dust.

HUMANITY is going to do that, as Chinese, Indian, billionaire and other tourist Apollo-wannabes rush for their national rites-of-passage – or bar-moonzvahs. And don’t they deserve their own moment without the elder sibling stealing the moment? Like the scene grabbing older sister of a bride? WHY should we race to snatch away their moment, only stirring resentment?

What we should NOT do is get suckered into a symbolism-drenched “joint mission’ with Earthly rivals, that would only mean transferring a lot of western technologies to those rivals.

FAR better? Go go ahead with earlier plans to and make a laboratory + hotel orbiting the moon! Rent out hostel rooms and landers for the tourists. We can then help advance lunar stuff while making a profit off the sightseers! Heck, if they rent our landers, we can keep one ready to rescue the tourists, if needed! Welcome honored guests. Welcome to our moon.

If actual self-interest and progress were the goal, instead of frippy symbolism, we’d lift our sights to farther horizons, where the wealth and resources and true opportunities await, like at 10,000 asteroids that are vastly richer and easier to get to, robotically, than the useless lunar plain

YOU may be complicit in this mistake, cheering on the insanely expensive and obsolete Space Launch System, a series of billion-dollar throw-away dinosaurs in an era of re-usable rockets, whose whole real purpose has been to feed old Shuttle contractor-parasites. Recognize a scam when it is so blatant.

I am not alone in protesting the scam. My NIAC compatriot Edgar Zapata reviews the recent memoir, “Escaping Gravity: My quest to transform NASA and launch a new space age,” by former Deputy NASA Administrator Lori Garver, who fought (and about half succeeded) to shift NASA away from expensive and futile trough for fat contractors  into a leaner and more vigorous agency that stimulates innovative endeavors in spaceflight and science, starting with buying launch services at competitive prices, instead of living to serve cost-plus dinosaurs. An interesting and well-written read.
Don’t let any of that be a bummer!  We still should aim high and go. We just need to lift our gaze even higher!
== Addenda! More space Distractions? ==

Here’s amazing footage by Mars Express of the little moon Deimos passing in front of Jupiter’s moons Europa and Ganymede, followed by Jupiter, and Io and Callisto. Um talk about depth of field!

One of the coolest recent projects we’ve funded at NASA’s Innovative & Advanced Concepts program – (NIAC) … drawing oxygen from the thin Marian atmosphere through a simple, efficient cycle of adsorption and release. It looks like it’ll work!

The Federal Communications Commission has a plan to minimize space junk by requiring low Earth orbit (LEO) satellites to be disposed no more than five years after being taken out of service. About time.

After a journey of five months, the first tiny cubesat to fly and operate at the moon has successfully arrived, orbiting within 3,000 km of the lunar surface.

Just as the Bush Administration blocked satellites to study atmospheric CO2, the Trumpists did everything possible to protect super-polluters of methane. Now, finally, we are getting to see who is responsible for one of the foulest crimes in the history of our species. Methane ‘Super-Emitters’ Mapped by NASA’s New Earth Space Mission.

Relative to carbon dioxide, methane makes up a fraction of human-caused greenhouse-gas emissions, but it’s estimated to be 80 times more effective, ton for ton, at trapping heat in the atmosphere in the 20 years after release. Moreover, where carbon dioxide lingers for centuries, methane persists for about a decade, meaning that if emissions are reduced, the atmosphere will respond in a similar timeframe, leading to slower near-term warming.

Is human hibernation possible? We all recall how Kubrick and Clarke solved the problem in 2001: A Space Odyssey, with ‘sleep pods.’ Here in this article authors describe the current state of hopes for human hibernation, which could, in theory, truly open up the solar system and beyond.

At NIAC, we did issue a phase one study of the ‘logistics of torpor in crewed missions,’ or how to support/care for astronauts who have been chilled/sedated into the range that medicine now thinks remotely plausible, well short of what’s done routinely by bears and arctic squirrels, each winter. The study was not encouraging. But the researchers persevere.

And hence, in the name of my late colleagues Greg Bear and Octavia Butler and especially Arthur Clarke, I have to ask the managers of this simulated reality…

…seriously? Are you even trying, anymore?