Is Russia triggering a cleansing surge against financial secrecy? And stuff about Crypto!


Sometimes it’s the dog that didn’t bark in the night. The expected thing that did not happen.

For example, where is the Russian cyber war that everyone expected to be one of Putin’s spasms, unleashed against the West when he grew desperate? Weren’t all our banks and pipelines and power grids going to collapse, at the very moment he gave a nod? Is it possible that our nerdy protector castes and their tools – and even out utility companies – turned out to be better than expected? Or Kremlin basement-dwellers much less competent?

Moreover, has anyone else noticed a plummet in the number of trolls on social media, now that Moscow is cut off from most? Has the vast Kremlin agitprop machinery collapsed, as Wired suggests? 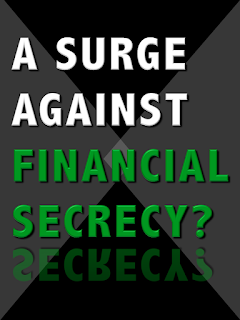 “The Kremlin has spent millions in terms of dollars and hours in Europe alone, nurturing and fostering the populist right (Italy, Hungary, Slovenia), the far right (Austria, France, Slovakia), and even the far left (Cyprus, Greece, Germany). For years, elected politicians in these and other countries have been standing up for Russia’s interests and defending Russia’s transgressions, often peddling Putin’s narratives in the process.”

And even more important, networks of American Q-nuts and Fox-watchers who till now never questioned even Twilight-Zone-level absurdities and schism-ing previously verbotten things called … ‘facts.’

Interesting article and we can hope it is true. Though, even if the Kremlin’s surficial agitprop webs are dissolving, that still leaves in place the part of the Kremlin’s influence web that is most powerful at swaying big swathes of Western elite castes, and through them millions of our most gullible neighbors – a part that no one, anywhere, even slightly talks about. (Except me, duh.)
Going back to czarist times, Russian secret services always, always sought foremost to entrap and blackmail enemy elites getting them to then serve as agents and moles. If Borat could do it accidentally to Rudy Giuliani, how hard can it be? And do you have even a remotely-plausible alternate explanation for Lindsey Graham? Or Ted Cruz or (hell yes) Susan Collins?

Again, there is one thing that Jobee could do to overnight restore health and vigor to America and Western civilization, though amid a few months of painful, searing light. That would be to establish a truth and reconciliation commission charged with recommending clemency in exchange for folks stepping forward with revelations about bad-things. Especially turning tables on their blackmailers.

If I am wrong about that being a big problem, possibly a cancer on us all… (how can I possibly be?)… then where would be the harm? But if I am right?

A few dems – and a whole lot of goppers – would have to retire.

We may see more women in Congress, as a result.

We’ll be saner, better… and clean.

Are we seeing – as predicted in my novel – a Western Revival and push back against World Oligarchy? First came a landmark deal agreed upon by the world’s richest nations as one of Biden’s first endeavors – a global minimum rate of corporation tax placed on multinational companies including tech giants like Amazon, Apple and Microsoft. Late last year, finance ministers from the Group of Seven, or G-7 nations agreed to a global base corporate tax rate of at least 15 percent.  Companies  with a strong online presence would pay taxes in the countries where they record sales, not just where they have an operational base.

And now, amid the furor over Russia’s insane invasion of Ukraine, Western nations are hunting down assets like yachts and mansions set up in London and New York and Paris by Putin’s fellow “ex” KGB agent oligarchs, billions stolen (with Bush-Cheney collusion) from Russian citizens by those former, sworn Marxist-egalitarian*) commissars and sheltered behind shell corporations.

Will the U.K. and USA actually end that dismally vile practice across the board? No way! Not yet, that is. These baby steps are far short of the general transparency of ownership that came (fictionally, alas) out of my “Helvetian War.” And far, far from enough! But at last some of my large scale ‘suggestions’ are being tried.

Now to get all fifty U.S. states to pass a treaty among themselves, banning ‘bidding wars’ for factories, sports teams etc… with maybe a sliding scale tilted for poorer states or low populations. A trivially easy move that’d save citizens hundreds of billions.

And while we’re at it, let’s overcome the treasonous GOP resistance to fully funding the IRS to audit the rich.

ProPublica has obtained a vast trove of Internal Revenue Service data on the tax returns of thousands of the nation’s wealthiest people, covering more than 15 years. The data provides an unprecedented look inside the financial lives of America’s titans, including Warren Buffett, Bill Gates, Rupert Murdoch and Mark Zuckerberg. It shows not just their income and taxes, but also their investments, stock trades, gambling winnings and even the results of audits.

Taken together, it demolishes the cornerstone myth of the American tax system: that everyone pays their fair share and the richest Americans pay the most. The results are stark. According to Forbes, those 25 people saw their worth rise a collective $401 billion from 2014 to 2018. They paid a total of $13.6 billion in federal income taxes in those five years, the IRS data shows. That’s a staggering sum, but it amounts to a true tax rate of only 3.4%.

Over the longer run, what we need is the World Ownership Treaty. Nothing on Earth is ‘owned’ unless a human or government or nonprofit claims it openly and accountably. Shell corporations go only one-deep to real people.

Note that this would not be ‘socialism’! No tax rates would rise, no confiscature. Just trillions in wealth cached out of sight by cheaters added to tax rolls while rates for law-abiding taxpayers would go down.

In fact, so much illicit property would likely be abandoned by criminals etc. that national debts could be erased and the rest of us could have a tax jubilee. Don’t believe that? Do the math. Offer wager stakes.

Is that proposal moot, in an era when ownership can be masked with digital, crypto-property?

Well, first, I actually know a little. I’ve consulted with a number of companies about the coming era and I speak at “NFT Con” in San Diego on April 9-10.

All right, there is no way to “ban” crypto currencies in general! But there is an approach to making them much more accountable to real life law, though I see no one mention it.

Let’s start with an ironic fact. Blockchain-based token systems are not totally secret!  Yes, they use crypto to mask the identity of token (coin) holders.  But those holders only “own” their tokens by general consent of all members of a communal ‘shared ledger’ that maintains the list of coins and which public keys stand ready to be turned by each token’s owner. In that sense it is the opposite of ‘secret,’ since the ledger is out there in tens of thousands of copies on just as many distributed computers. Attempts to invade or distort or corrupt the ledger are detected and canceled en masse. (The ecologically damaging “mining” operations out there are partly about maintaining the ledger.)

All of this means that – to the delight of libertarians – it will be hard to legislate or regulate blockchain token systems. Hard, but not impossible. For example, the value of Bitcoin rises and falls depending on how many real world entities will accept it as payment… and governments have been hammering on that, lately, especially China.

There is another way to modify any given blockchain token system, and that is for the owners themselves to deliberate and decide on a change to their shared economy… to change the ledger and its support software….

…and I’ll elaborate on that in another posting. If the world lets us.

Meanwhile, hang in there. The enlightenment is fighting back. Be prepared for good or bad. Help those on the front lines.