NEWSWEEK requested an op-ed from me about artificial intelligence and my prediction in 2017 that “in about five years” we would enter the First Robotic Empathy Crisis, when some language program — perhaps augmented with appealing visuals — would proclaim “I’m alive!” Possibly with the addendum: “Send money!”

The op-ed will run this week and I’ll return to this posting, in order to edit-in the link… right here.

In a very short space, I try to offer bigger than normal perspectives, focusing especially on which aspects of human nature… and this particular, peculiar civilization… make us especially sensitive to such appeals. And how we might navigate a carefully fair path ahead.

One thing I do know. The dominance of advertising as a driving economic force on the Web has been less oppressive or deadly than if we’d had central state control. Still, the advertising model is a crappy system, long needful of replacement… or at least supplementation with a better approach.

And so, let’s start this delayed weekend posting with a link to some perspectives on that problem that you may not have considered… and might want to.

And if you are still around after that?

Lucky you! I’ll finish with a short riff on money velocity!

I gave a webinar on the future of online payment systems a few months back, with emphasis on how the time may have come – at last – for micropayments systems to partially replace irksome advertising. Four fine legal scholars weighed in, with edifying perspectives! Some of you may find it interesting.

Would you pay a nickel for an occasional, interesting NYTimes or Scientific American article, if it meant you wouldn’t face a paywall, any password hurdles, visit logs or adverts? My original essay on the whole thing… published in EVONOMICS… is also available.

Wealthy families could face combined tax rates of as much as 61% on inherited wealth under President Joe Biden’s tax plan, according to a recent analysis. Biden’s plan proposes to nearly double the top tax rate on capital gains and eliminate a tax benefit on appreciated assets known as the “step-up in basis.”

Two aspects to this:

1. No wonder the oligarchs hate him! But anyone howling about this on the right, despite the fact that enterprise and entrepreneurship and flat-fair competition all did far better under the Rooseveltean social contract, with far lower wealth disparities, ought to recall that this Biden proposal would amount only to rescinding the cult-voodoo experiments in ‘supply side’ that failed in every single prediction or promised outcome. Without a single exception.

2. Anyone on the left who has snarled at JoeBee for being “Republican Lite”… YOU are responsible for his low polls and the power slipping away. You and your ilk. You and exactly you, showing yet again that the left wing of democrats would not know how to craft a loyal and effective coalition if their very lives depended on it.

And they do, twits. Your very lives.

== And hell yeah, some liberals are doing great stuff! ==

First, a tip and a tool worth spreading. The Canadian Women’s Foundation has created a hand signal for those who are victims of domestic violence which can be used silently on video calls during the coronavirus crisis to signal for help.  But not just for video calls, as illustrated in this earlier video.

And while we’re talking inspiring ways to move ahead… Big star Bruce Springsteen’s Jeep commercial paid homage to the ReUnited States of America… a lovely sentiment! (Calling to mind “malice toward none” from Lincoln’s 2nd inaugural address, one of the top ten speeches of all time.)

It also called to mind – for not a few folks who pinged me – resonance with the “Restored United States” of my novel (and the film) “The Postman.” (Which has itself been “restored” or refreshed, edited and updated with two new Patrick Farley covers and a new introduction. And apparently there will be interesting news soon (perhaps) about that franchise.

Listen, fools, I’m no commie. I believe that reciprocally competitive systems are the most creative… it’s how nature made us!

Only in human societies. we aim to reduce the side effects that too often make competition brutal and robbed it of any grace, ruining its outputs in much of evolution and certainly in 99% of (feudal) societies… death (nature is way bloody) and its equivalent that kills a fair society… cheating.

Yes, we need competitive markets to create the vast wealth that could let us end poverty and save the world, and those competitive markets function best when competing individuals, partnerships, families, enterprises perceive a chance to profit and prosper!

On the other hand, all good things in the world become toxic when too heavily concentrated! Oxygen, water, food, light, power… and wealth packed together in mountains that turn rich families into noble brats, that turn businessmen into cheating monopolists, and that turn business majors into parasites who forget all about goods and services. 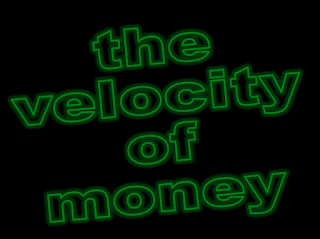 One of the strongest signs of a vibrant economy is called Money Velocity – MV- which measures how often dollars change hands. In a busy economy, with lots of employed folks spending and buying goods and services, MV is moderately high.

History does give examples of MV being TOO high, causing sharp inflation. But ever since the Reagan era, Money Velocity has fallen, in lockstep with every single Supply Side Theory tax cut-gusher-gift to the rich. And across the Trump years, the collapse of MV became a nosedive!

This is diametrically opposite to what Supply Side (SS) fans confidently predicted, over and over again. As happened with EVERY prediction that mad cult ever made. And I stand ready to bet real stakes on that.

In science, when a theory is always wrong, it gets abandoned. When it is always wrong — and the same magical incantations are used to support trying it yet again — then the word is “insanity.”

Adam Smith himself said this (without using the term MV, of course):

When the already rich get sudden bursts of yet-more cash, they do NOT hurry to invest it in bold enterprises or in factories producing more (supply) goods and services. Oh, a few do. But a vast majority squirrel their new largesse away into capital preservation investments, rent-seeking (“rentier”) holdings, asset bubbles and cheat schemes, exactly as Smith described in The Wealth of Nations.

They don’t even buy all that many yachts! Any cub scout will tell you that pattern takes dollars out of circulation and eviscerates Money Velocity.

That truth is almost as pure as what the previous paragraph said about the rich. And note that Joe Biden’s “expensive” Infrastructure Push will put no more cash to work that way than Supply Siders poured into the aristocracy. In fact, they are VERY similar amounts…

…with diametrically opposite likely outcomes, especially re MV. And of course, that is what terrifies McConnell. Because he knows it will likely work.

Want to incentivize investment in R&D, new products and services and productive capacity? Before Supply Side we knew how to do that, with generous tax breaks for exactly those things, targeted ONLY on those things. It worke, unlike SS, which never (I repeat never, ever) has.

What is crazier? That U.S. conservatives cling to a magical incantation (one of many!) that has been utterly, utterly disproved?

Or that Democratic politicians are unable to parse this contradiction in clear terms the People can understand?  YOU understood what I just wrote. The People would, as well.