from supermassive black holes to asteroids


Okay, let’s gat back to spaaaace!  So many reasons to be enthusiastic and to see our shared accomplishments out there as signs of real civilization, down here on Earth… a civilization worth saving.  Plus a few causes for cynicism, alas. 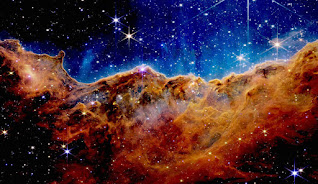 The biggest news: we’ve received the first vivid images from the James Webb Space Telescope. (The Carina Nebula in spectacular detail shown to the right.) The Webb has produced phenomenal high-resolution images of deep space: galaxies, star clusters, and nebulae – with a promise of more spectacular images  to come!

Breakthrough methods pioneered by the B612 Foundation are finding hundreds of asteroids – some of them dangerous – by mining past data sets. A great way for a small foundation to amplify the more expensive projects funded by governments. Small enough and effective enough to perhaps merit your support. (I am on the B612 advisory board.)

A Very Long Baseline radio telescope array (I worked for one of the first VLBI systems one summer, in 1969) spanning the entire Earth – the Event Horizon Telescope – has imaged the supermassive black hole – Sagittarius A* – at the center of the Milky Way galaxy.

Taking the Sagittarius A* image (shown to the left) was like capturing a photo of a grain of salt in New York City using a camera in Los Angeles, according to California Institute of Technology researchers.

Somewhat smaller… Astronomers believe that 100 million free-floating black holes – largely left over from supernovas – roam our galaxy. Now, after dedicating six years to observations, astronomers apparently found one about  5,000 light years away, located in another spiral arm of the Milky Way.  And with gravitational lensing, they made a precise mass measurement of the extreme cosmic object, which might possibly be ‘only’ a neutron star.

Meanwhile, Europe’s legendary GAIA space telescope has been an absolute treasure for science, concentrating first on measuring parallax and proper motions of millions of stars near us, then gathering color/spectral data on billions more – – about 1% of the total number in the galaxy – and are allowing astronomers to reconstruct our home galaxy’s structure and find out how it has evolved over billions of years.

You are a member of a civilization that does this kind of thing.

== Back in your SSR backyard – Your Solar System Region! ==

Meanwhile, we keep being inspired by the great Perseverance/Ingenuity mission. The little ‘copter snapped these closeups of the now-standard and reliable sky-crane landing system, whose components seem to have crashed more durably than expected.

It makes one wonder: Would it really be that hard to enable these other bits to land softly enough to serve some purpose? Say as a weather station? The rocket+crane bit, especially. It must fly away from the main cargo/rover, sure. But how hard would it be to throttle the remaining fuel-seconds to set down with a simple weather sensors + transmitter? Use up the safety margin!

Anyway, Perseverance and Ingenuity keep surprising us! Like this ballyhooed “doorway” in the face of a cliff. Oh, I totally believe it is a natural fissure… but still, they really need to drive up and get a closer look. One Earth, clean vertical cleavages, like railroad cuts – were key to the sudden emergence of both geology and paleontology.

Phobos could possibly be among the most valuable pieces of real estate in the solar system, if there are volatiles under the surface that can be turned into water and fuel.  See the gorgeous images of Phobos eclipsing the sun, taken by the Perseverance rover!

We know that the magnetic poles of our planet sometimes drift (as today the North Magnetic Pole  is rapidly moving to Siberia) and occasionally quell or even flip.  Now comes speculation that such flips can happen on a massive scale, even to the monster black hole at the center of a galaxy 250 million light years away.

Farther out: The Decadal Survey of NASA advisors has recommended priority be given to… Uranus!

And emerging from some of our old grants at NIAC… the Da Vinci+ probe will try to repeat what Cassini-Huygens did for Titan, only for Venus! I wish the descender-probe had a slow-down balloon, but this will still be… well, not cool. Hot!  At the end of the decade.

And Truly far-out… if within reach… You’ve seen me tout NASA’s Innovative & Advanced Concepts program – (NIAC) – on whose advisory council I serve. Look at their tiny seed grants to research concepts JUST this side of science fiction. These are fun, engaging, STEM books for grades 4-8 about the science and researchers behind the NIAC program. It includes information about their lives as young children and their inspiration. Produced in partnership with World Book, Inc., they recently won an award from the American Library Association (ALA). A third series is in early development. The two series help to support a big part of what we do as an early stage technology program- to inspire the next generation of scientists and innovators, children who may eventually be running NASA missions 20 years from now. You are welcome to view the sixteen Out of This World books online here:

Series 1 Out of This World includes titles such as Asteroid: Harpooning Hitcher, Land-Sailing Venus Rover and Laser-Sailing Starships. All available online!

Read some of these then look around… and have some confidence.