Okay, all the ructions in real life and the (quasi real) politics have delayed this post about … scifi!

Fist a bit of news for your reading list: SFWA is pleased to announce the finalists for the 57th Annual Nebula Awards… recognition of their excellent works of science fiction and fantasy published in 2021. The awards will be presented in a virtual ceremony on Saturday, May 21, 2022.

== The Underpinnings of a Foundation ==

Folks have asked my opinion of the Apple+TV rendition of Asimov’s Foundation. So sure, let’s dive into what surely was the most-anticipated sci fi media event of summer-autumn 2021.

To be clear, I’m not doing amateur venting, here. There’s likely no living human who knows the Foundation & Robots universe with more depth and breadth than I do, having tied together all of Isaac’s loose ends in Foundation’s Triumph, pulling in not only his major plot lines from Foundation’s Edge and Foundation and Earth, but also neglected-hanging threads from The Currents of Space and The Stars, Like Dust, and Pebble in the Sky as well, dealing with the contradictions of R. Daneel Olivaw and bringing the whole saga full circle, back to Isaac’s first love – the original Foundation. 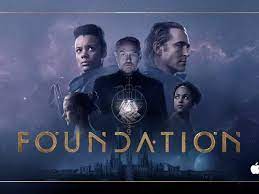 So heck yeah, I care about this. And let’s start by saying these folks (via Apple TV) – especially David S. Goyer – are giving us some cool new layers to a universe that (frankly) was rather sparse in both action and interesting character interaction, in the novels.

Still, how I wish I could have been at some of the meetings for this show. It woulda helped.

So let’s dive in.

First, I don’t mind most of the embellishments and expansions in the miniseries, which are overall arty and well done. Transform Salvor Hardin and Gall Dornick into formidable black females? Sure! I very much doubt that Isaac would have minded. After all, he gave us Bayta Darrell and her wonderful daughter Arkady Darrell, two of the most audacious, galaxy-changing women characters any of us had ever seen, in the 1950s and 60s.

The Cleon Clone Dynasty?  A whole lot of screen time and lavish effort goes into this non-Asimov story of the imperial genetic clone dynasty. And up to a certain point, I was delighted!  Mr. Goyer creatively added a layer of creepy tyranny and ruthless politics that’s well-written, innovative and very well-acted. Though below I will cite a deep flaw… that the imperial clones are portrayed as a cause of the Empire’s fall, rather than a symptom.  And alas, that’s a completely unnecessary betrayal of the entire concept.

So yes, I applaud the innovations, in general! I do mind flaws of logic and missed opportunities, like failing to show any resentment on the part of the Terminus exiles toward the man who got 100,000 of the best minds in the Empire banished to an isolated wasteland. (I show this resentment in Foundation’s Triumph and it would have added a way-cool plot element of conflict.) As things stand, the uniform adoration of Seldon seems rather more like a cult than a collection of the Empire’s best minds.

Again, there are many fine additions, and the emperor plotline is fine, overall. Well-acted/directed. But the story’s nods to psychohistory and The Seldon Plan seem perfunctory, instead of the sun around which all else ought to revolve.

Example. There’s barely even a sentence about why the empire is crumbling, not even cursory mention of the causes Asimov cites in the books or that I elaborate in Foundation’s Triumph.  Causes that are redolent today!  Like a tendency of human societies to let power pool into aristocracies, if they aren’t very careful, or to let such men (yes, the tendency is especially male) rationalize clutching power and passing it to their heirs, especially sons.

And note how simply saying that – as a psychohistorical point: maybe the most prevalent one – would have shown that self-cloning is just a continuation and extension of that insidious tendency.

As I said, if you want to be true to psychohistory, then the Cleon genetic dynasty should have been a symptom of the empire’s sickness, not a cause. As one who has ‘channeled’ Seldon extensively, let me suggest what Hari could have said. 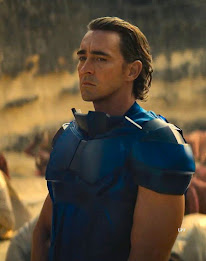 “Your genetic dynasty is a late stage outgrowth of a trend that has been worming into the Empire’s heart for 3,000 years. It’s not just you Cleons. Following your example, Empire, first all the noble families copied your approach… and now top leaders of every guild and profession are also cloning themselves, crushing diversity and creativity, speeding a decline in technological competence across the galaxy.  It is one of many factors accelerating an already-unstoppable race to the bottom, as brittleness and stagnation spread under 10,000 suns.”

Do you see how – without taking anything at all from Goyer’s brilliant Cleon Layer to the story, he could have given us deeper insight into why this is a sickness that cannot be halted, only dealt with?

== Other ways the good could have been better ==

There are other choices that seem to shrug off the central conceit of Isaac’s universe. Yes, many added layers supplied badly needed drama and personality!  But a few sentences here and there could have blended them in much better.

It’s not just all the psychic powers stuff. I never liked that in Isaac’s cosmology, and so I downplayed it in Foundation’s Triumph. But Asimov did have it, and that’s that. Many have commented about Salvor Hardin being a ‘mule’ way too early in the series. Well, we’ll see how Mr. Goyer rationalizes that, in future seasons.

Okay, there are stronger complaints out there. Yes, the Anacreon thing is left to chance and happenstance and individual action flukes. Like the Huntress’s whole plan would have collapsed if the imperial starship captain had been even slightly competent, taking even minimal precautions. And how did she know the imperial captain would be the sole survivor? And how many times do we see not even one person have the guts to say “You’re gonna shoot me anyway, so up-yours!”

Lip service is paid, late in Season One to the whole Asimovian notion that the solution to Anacreon would be psychohistorically “obvious,” driven by inevitable interstellar politics, instead of individual heroism and chance.  Yes, by all means show individual heroism and chance! It drives drama! Great kickass screen fighting, sure! Especially saving those individuals you love. But the solution – balance of power – must be inevitable… or the whole premise of the series is a joke.

Hari’s speech at the end hinges on persuading Thetans and Anacreons to accept a sudden end to centuries of death grudge. Ah well.

Very little is made of the fact that Terminus should be technologically a lot more advanced than its neighbors. Instead of enticing the fringe kingdoms with promises of fusion power, they argue over water clocks and sundials.

First, to be clear, I don’t mind the Gaal (Gail) Dornick plot line, home planet and all. Fine stuff. Creative and interesting and fun. Heck the daughter thing? Okay.

Introducing the “spacers” as a different version of humanity is another thing Asimov did not do for 500 more years… but I don’t mind Goyer weaving in hints, early on.

Likewise the imperial factotum – the immortal Demerzel robot who will doubtless turn out to be Daneel Olivaw – is a fine layering of interesting and dramatic character, spicing up the TV series.

Nevertheless, she would have deeper programming than simply reflexive obedience to the House of Cleon. If there aren’t Three Laws embedded in her… only over-ruled by a Zeroth Law… then this does not add to Asimov, it wrecks him. I am counting on Mr. Goyer to make this clear, in time. (And I could explain and help weave it in.)

== More depth to the Foundation Universe? ==

I explore this ornate SF cosmology in more detail here, from the perspective of one who deeply immersed and tied Isaac’s loose ends, discussing how Asimov’s perception of his own cosmology changed and evolved over the decades.

A core point that I’ve seen mentioned nowhere else is how Isaac kept relocating the locus of hope as he grew older, from unstoppable “gas law” forces of statistical history to manipulative (Second Foundation) psychologists who keep the Plan on track…

…to mutant psychics… and then to robot eunuch controllers-behind-the-scenes… to notions of pan Galactic psychic homogenization.  I tried to address them all and show how things inevitably come full circle.

Finally, I want to respond to one of the critics whose screed in The Atlantic I found particularly offensive, obsessing on his ‘goodguys-badguys’ drivel. All right, he makes one arguable point saying that the “…characters are motivated not by bursts of rational insight, but raw ethnic and identitarian resentment. This gets tedious after a few hours.”

Well, again, I don’t mind there being a lot of added violence, since cinematic TV/Film require that sort of driver of vigorous on screen spectacle and action! 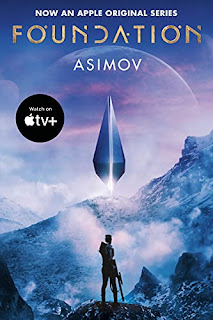 Nor (as I’ve said) do I mind the addition of non-Asimovian sub plots like the cloned emperors and all that jazz.

Fine. That’s arty and so is making the “Anacreons” a really angry metaphor for wrongheaded but deeply motivated terrorism. I did not even mind Goyer bringing in “Spacers” eight books early and making them almost exact copies of DUNE’s guild navigators.

The magical Time Vault I could live with. But again, the fundamental notion of the series… that Terminus is a colony of the competent, in a galaxy where competence is plummeting, is kinda hard to connect with a magical oracle that no one on Terminus will ever understand. (Where did Hari get that magic tech?)

Alas, I hope Mr. Goyer is not planning on populating the entire series with all sorts of psychic fortune-tellers and irreplaceable individuals-without-whom-all-collapses.

Are individual/brave heroes important to storytelling? Yes! And the reconfigured Salvor Hardin is fine… if what she does is save other individuals or the people she loves. But the Seldon Crisis solution needs to be “obvious” with or without her, or it is not Asimov’s Foundation.

I do have hopes, though. And at least this is more bold than the tsunami of clichés out there. So good luck! And may the (psycho-historical) odds be with you.

Heck, these days, we could use some ‘inevitable’ progress towards hope.