CONTRARY BRIN: Space: wonders from within our solar system

Soon I will be flying to DC for the annual orientation meeting of NASA’s Innovative & Advanced Concepts program – (NIAC). Have a look at some of this year’s seed grant award-fellowships to study possible technologies just this side of science fiction!
Of course last month’s most exciting news was NASA’s successful launch and deployment of the James Webb Space Telescope – the largest space telescope, which will help illuminate the mysteries of the cosmos! Here’s amazing video of the observatory’s separation from the Ariana 5 rocket in space. We are already getting the first images.
One thing I learned: in order to zero in on a target, the whole spacecraft rotates, but must keep the shield blocking any sunlight or Earthlight. That means Webb will not have much freedom to choose targets at-will, but rather will study distant vistas on an opportunity basis, during its yearly solar orbit. Unlike Hubble, it won’t normally be available to swing around toward just any transient phenomena. In a given week, it will have a pretty narrow, ring-like array of possible targets to sample-study. Inside those rings, it will likely be magnificent! So next time there’s some transient event out there, like an ‘Oumuamua, don’t go shouting ‘give us the Webb view!’ A good reason to keep Hubble.

LISA– Laser Interferometer Space Antenna – will be an ESA-led and NASA supported mission to deploy laser interferometer arrays into an orbit that follows Earth’s, bouncing beams across distances much larger than our planet. The Europeans have been working on the concept and testing it for decades. Now we may be ready soon to study gravity ripples vastly more sensitively than the already magnificent (and Kip Thorne-led) LIGO array.

Meanwhile, we have fantastic results from our Juno probe orbiting Jupiter and probing the storms down below even 500 km. Helping to illuminate our own weather patterns, these discoveries are simply amazing… almost as amazing as the spectacular competence of an enlightenment civilization that does such things… and the cosmic unlikeliness that citizens of this civilization simply shrug off or ignore such wonders. 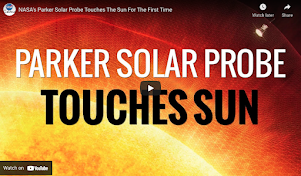 And for the first time, a NASA spacecraft has ‘touched the sun.’ The Parker Space Probe, launched in 2018, first reached the sun’s corona a few months back. The probe will approach the sun 24 times over its lifetime, sending back data about our sun… A good reason to revisit my first novel, Sundiver!

== Wonders beyond our solar system ==

We’ve long known that the planets of our own Solar System emit powerful radio waves as their magnetic fields interact with the solar wind, but radio signals from planets outside our solar system had yet to be picked up. Till now. “This discovery is an important step for radio astronomy and could potentially lead to the discovery of planets throughout the galaxy.” Red Dwarf stars have much more powerful magnetic fields than the Sun’s, and the exoplanets we’ve found orbiting them can be much closer than anything in the solar system; hence interaction might generate powerful radio emissions. This promises a powerful method added to the quiver of planet hunters.

Astronomers caught a 2020 supernova in the act way earlier than ever and the data will be powerfully revelatory. “This is a different situation, because we really know what’s going on and we actually see the death in real time.”

Observations of circumstellar material in close proximity to the star were made by Hubble just hours after the explosion, which, wow. The star shed this material during the past year, offering a unique perspective of the various stages that occur just prior to a supernova explosion.

A bright red dwarf system just 150 light years away has planets orbiting perpendicular to each other. Creepy.

Black hole star destroyers: When a star gets so close to a black hole that the tidal force results in material being stripped from the star… simulated eight ways vividly (!) in this video.