As we sit here, teetering at the fringes of a possible spasm ordered by a desperate mafia thug (have you done your Costco run, yet?), I’ll post tonight about more mundane political matters… that still desperately matter.

Let’s start with a fiundamental that I cannot repeat too often. The fundamental human problem is willful delusion. We are all delusional, preferring subjective overlays on the world over any need to re-evaluate. Heck, pointing this out was the central common theme shared by Socrates, Plato, Buddha, Jesus, Confucius and so many others… who nevertheless never noticed what Galileo finally saw… that there is a way out of the trap!

Fortunately, in a free and diverse culture, we do not all share the same delusions! If it’s hard to see our own, we will gladly point at each others’! Reciprocal criticism is the only known antidote to deluded error.

Alas, it only flows under conditions of relative equality, when reciprocal criticism cannot be punished by elites… as happened in 99% of human societies, where kings, priests, oligarchs and owner castes used their power to suppress criticism from below. In fact, it was usually their top priority.

This is why competition – the greatest creative force (that made us) is so hard to maintain in human societies and was quashed in 99% of them, till we innovated ways to flatten power structures and get elites criticizing each other. At which point cheating was reduced, openness allowed not only reciprocal criticism and accountability but also flexible alliances, leading to many positive sum games.

Economics is one of five great arenas that have boosted the benefits of competition, by making it (1) far less bloody than in nature, with many second chances, (2) filled with a maximum number of skilled competitors as Adam Smith and F. Hayek demanded, (thus wasting less talent), and far less prone to cheating than any other society… though still way too subject to it than ideal. 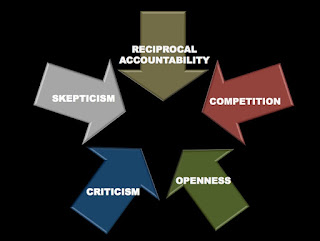 The other four competitive accountability arenas are democracy, science, courts and sports, all of which benefit from cheating-reducing regulation.

To be clear, those saying the c-word  ‘competition’ aloud the most have turned into its deepest enemies. Every ‘economics’ proposal made by today’s mad right is aimed at reducing competition, feeding wealth and power disparities, elimination of rival (accountability) elites, and cheating.  Hence the current ill health of flattening and other systems in markets and democracy, especially.

While this is an existential threat to our kind of civilization… or any long term civilization, at all… it should not be a surprise. Human nature, y’know. On the other hand, what’s at stake is only freedom, science, a living planet, civilization, our grand chil;dren… and possibly the fate of a galaxy.

I am critical of sanctimonious temporal chauvinism that assumes any current decade’s particulars of moral righteousness are the pinnacle of human awake-ness. And hence, I initially reacted with some hackles to this article about that the so-called “Greatest Generation,” which focused on sampled statements and/or survey answers that we’d rear-view as at-best cringeworthy or patronizing… and in many cases horrific.

(To be clear, in those days my own parents were deemed members of a despised caste, victims of pervasive prejudice, whose European cousins had just been consigned to ovens. And those cited surveys reflected this.)

Sure, it is valid to re-examine the faults of earlier generations, especially American hypocrisies. But just as the eminently wise Frederick Douglass weighed both faults and blessings, in his eulogy of Abraham Lincoln (do look it up!) we can do the same for the Greatest Generation, without leaping to conclude that reflexive blurting of their own parents’ bad habits made them an over-rated pack of racist, misogynist bastards!

Let’s set aside their brave and sturdy defeat of the worst evil the world ever saw, and containment of a Leninist cult that history later verified to be almost equally murderous. And the GGs’ massive investments in infrastructure and science and vastly uplifting universities, or their current utility as a refutation of MAGA treason. (Most of them adored FDR and later Jonas Salk.) Notably it was Ronald Reagan’s top priority to reverse every such strength.)

In fact, there are some valid criticisms of the whole “greatest generation” mythos. e.g. the very decisions in 1945 that led to the most fantastic era of human development and prosperity and (yes) overall peace were made by an older clade, including George (my choice of person of the 20th Century) Marshall, Truman, Acheson, Ike, etc. and mostly not by the younger generation who fought in trenches and who got the GG label.

And yes, I recall my own parents who marched with MLK and stood with Bobby and fought McCarthyism… as having nevertheless been troglodytic in many of their reflexes! Especially linguistic ones. They shifted some and adapted to hippie criticism (as do I, today, when our kids correct my pronouns.) But all of that just goes to prove something crucial here…

… that improving human civilization involves self-uplift in a grinding haul and slog out of caves and superstitions and mud and tribalism, and it’s NOT easy!

That long slog is – in fact – proof of my aphorism: Criticism Is The Only Known Antidote To Error. Sure, unless every generation re-evaluates and critiques, we will never slog our way upward to Star Trek. Or something much better.

The Great American Project of expanding circles of inclusion has staggered ahead, each generation with grinding, incremental slowness that certainly seems insanely and culpably tardy… and yes, it has been! Except by comparison to every single other society or nation that ever existed. (Please step up with your counter examples.)

To be clear, I am not preaching ‘patience!’ Go ahead and BE IMPATIENT!

We need to accelerate, if we are to get better at anywhere near a pace to call ourselves decent people, let alone save the world. Just because prior generations took some things for granted doesn’t mean we should. And science fiction plays a role, by showing us glimpses of futures when things-will-be-different.

1) Railing at past generations of reformers for not including YOUR more recent priorities is maybe a bit unfair. Besides not being here to defend themselves, a lot of them had full plates. (And that recent trend in SF is particularly regrettable, as scifi was always, always the genre most friendly to divergent authors and ideas.)

Look forward; you do not have to slur previous generations of reformers, just to make your own virtue signaling seem grander. It’s not just lazy but almost always unfair.

2) Consider that you may be part of a chain of uplift, leading to new generations who will re-evaluate YOU for things that you missed, or overlooked, that future generations will deem spectacular omissions from your high-preening virtue waving.

(Example, I predict that within a decade there will be a major revision of attitudes towards backbiting GOSSIP, which is arguably the nastiest evil routinely committed, today, by those who call themselves decent people.)

3) Consider the role of factors like technology, that allowed a nation of farmers to get their children off the fields into universities, or the effects of lavor saving devices and birth control on feminism, or new techs that are now empowering autism spectra folk (as I depict in Existence), or that made full transsexuality even a thing… or the power of newsreel and TV and web cameras to keep groundbreakers like Gandhi, MLK and the Wachowskis alive, let alone influential.

And finally… are we truly so vile?

4) Compared to what? Compared to 6000 years of grotesquely stupid and cruel feudalisms, this experiment has been swift and unrivaled. Compared to what we all know we ought to be? By that standard we have been sluggards and reluctant and grindingly slow.

But who taught you that standard of what we ought to be?

Hollywood. We are creatures of the very society we criticize.

== Were the men and women of the “Greatest Generation” imperfect? ==

VASTLY so! Their incremental forward-ratchetings of justice were contemptibly slow, while being faster and more righteous than anything that came before. We Boomers, too, made some progress… and merit similar crit.

But above all, attacks specifically on the “Greatest Generation” are spectacularly impractical, like lefties screeching hate at The US military, when the women and men in uniform are presently a bulwark against the real evil, an international oligarchic cabal bent on re-establishing feudalism with Orwellian force.

Dig this well. The Greatest Generation is an American icon! (See Tom Brokow’s best-selling book, The Greatest Generation.) And if you spurn them completely, letting the MAGAS clutch them as wholly their own, then you are giving a freebie favor to the enemies of this great (if deeply flawed) enlightenment experiment!!

I prefer to point out that the GG’s most adored living human was a fellow named Franklin Delano Roosevelt, and later they most-admired Jonas Salk and MLK and Bobby. And today most of them would easily see as Enemy Action the treason memes offered nightly on Fox, including hatred of all the nerdy fact professions that made America “great.”

They would hear today’s spasmodic-foxite “hate all government” yammering as betrayal and service to Moscow.

And they would spit in every MAGA eye.

Use that. Most members of that hero generation – for all their countless flaws – would want you to keep using them to defeat enemies of the Experiment. So use them.

And if war comes, remember, as they did…

I matter less than those I love… or the justice, freedom, progress and civilization and planet and posterity that I love.