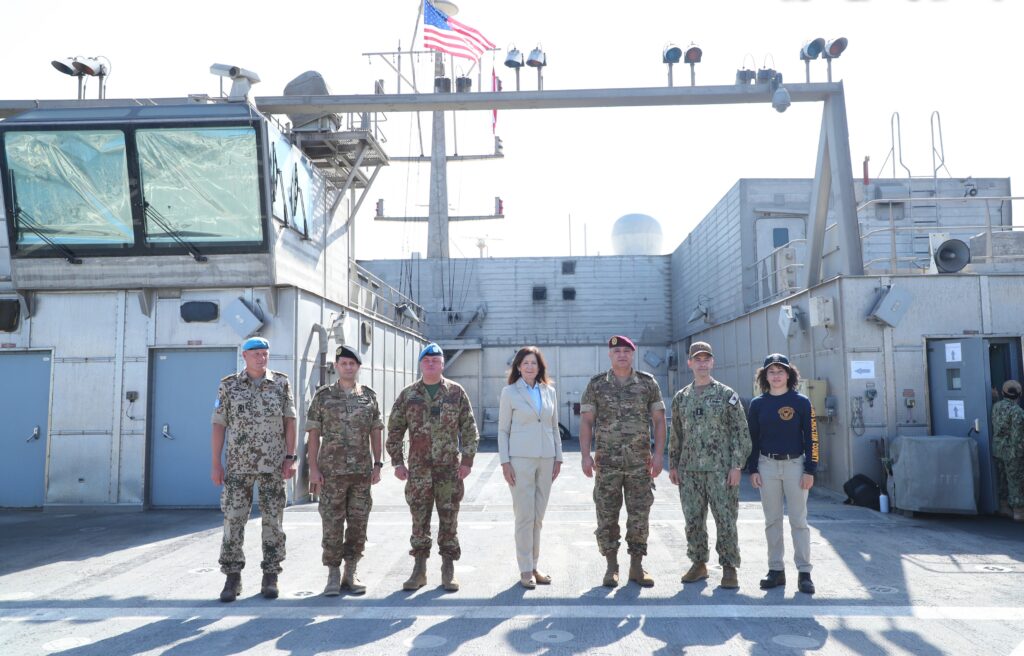 BEIRUT: When the Choctaw County, a fast transport ship, pulled into Beirut on Sept. 21 for the first-ever US Navy port visit to Lebanon, the messaging from the Navy was all about improving the military-to-military relations between the two countries.

But for analysts watching the situation in Lebanon closely, the timing signals more than just military friendliness. Coming in the middle of unprecedented economic and political pressures facing Beirut, analysts say the arrival of the ship is also a signal of support for the flailing Lebanese government — and particularly its military.

Officially, the visit is about “ushering in a new era of strengthening and expanding capacity building across the region,” as Vice Adm. Brad Cooper, commander of NAVCENT, US 5th Fleet, and combined Maritime Forces, said in a statement. A statement from the American embassy added that the port visit comes alongside “subject matter expert exchanges between the LAF Navy and NAVCENT personnel covering disaster response, public health, mine countermeasures, dive medicine and construction capabilities,” said the American Embassy in Lebanon in a statement.

And there is an active effort to strengthen relations between the two navies. Most notably, the Pentagon announced in June that it will donate three U.S. Coast Guard Protector-class patrol boats to the Lebanese Navy next year.

But it was hard to miss that during a Sept. 27 visit to the ship, LAF commander Gen. Joseph Aoun went beyond talking purely a naval relationship while stressing the importance of “the continuous support of our friendly countries, foremost of which is the United States.”

In turn, US Ambassador Dorothy Shea stressed her country’s support to a Lebanese navy “that carries out many sensitive missions against smuggling and terrorist operations to protect the territorial waters and the Lebanese people.” Shea also noted America’s investment in helping to reconstruct the Beirut naval yards after the Aug. 4 2020 explosion,

Ret. Adm. Nazih Baroudi, a former Lebanese Navy commander, told Breaking Defense that “the visit comes to culminate a long phase of cooperation and support for the Navy,” which began with former Deputy Commander of US Central Command Adm. Mark Fox and former Amb. Maura Connelly.

“The cooperation included a plan to develop the [Lebanese] Navy’s capabilities by equipping it with new speedboats and technical trainings,” he said. “It also resulted in equipping the naval forces with the advanced offshore patrol vessel Tripoli in order to secure the protection and support of the oil and gas platforms in the regional and economic waters.”

For many reasons, experts tell Breaking Defense, the visit was clearly a sign of how important the US-LAF bilateral relationship is.

Regardless of whether Lebanon’s government seems to be teetering, the American interest in the LAF was and still is promising, said Lebanese Ret. Brig Naji Malaeb. “This is clear in the statements made by politicians and military leaders in Washington and the regular visits of the Central Command officers to Lebanon and the army chief’s visit to Washington,” he said.

The presence of a naval asset like the Choctaw “improves the technical and tactical levels of the LAF Navy and secures the proper networking with the US Navy stationed in the Mediterranean,” added Malaeb. 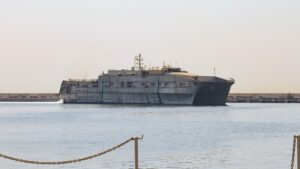 But more than anything, the port visit “it is an affirmation of that confidence, especially within CENTCOM, vis-à-vis a trusted partner during difficult and unprecedented times,” said Aram Nerguizian, an expert at the Center for Strategic and International Studies in Washington.

Wehbe Katicha, a retired general who is now a member of parliament, seems to agree. “The dire situation of the Lebanese Armed Forces, whether logistically or financially as a result of the state’s bankruptcy, is one — if not the main — reason for this visit,” he told Breaking Defense.

The devaluation of the Lebanese currency and the cuts in the defense budget have led a to major reduction in the value of the salaries for members of the military. For example, the basic monthly salary of a soldier, which used to amount to around $800, is worth under $120 today.

Put bluntly: the US is working to strengthen the LAF, whose leadership it has good working ties with, so that it is the most capable branch of the Lebanese military, “especially at a time when the government fails to use the army to prevent smuggling between Lebanon and Syria,” added Katicha.

The visit is also a clear sign that “Washington intends to reassure its allies that the American withdrawal from Afghanistan does not mean giving up their support or continuing coordination and securing all their requirements,” said Malaeb.

The importance of the eastern Mediterranean region and the discovered gas also requires an “American military presence to prove strength in front of other investors like France, Turkey or even Russia,” he added.

The visit comes as the US government is preparing a NAVCENT-hosted conference to discuss ways to advance the Lebanese Navy’s capacity and interoperability with foreign navies.

While no specific date has been set, Baroudi tells Breaking Defense coordination efforts are underway with the Lebanese Naval Command. Per Baroudi, 20 countries are expected to attend, including Germany, France, Italy, and the United Nations Interim Force In Lebanon (UNIFIL) troop-contributing countries.

Those countries all have already expressed interest in building up the Lebanese navy, he said. Germany, for instance, is “rebuilding the Beirut naval base, which was destroyed by Beirut port’s huge explosions on Aug. 4, and a new naval school in Jounieh, a coastal city about 16 km north of Beirut,” Baroudi explained.

France meanwhile “is supposed to provide the Lebanese Navy with four OPVs [offshore patrol vessels] of 60 meters length each and one naval vessel fire protection,” a Lebanese military source told Breaking Defense, adding that “Italy however could contribute to the training of naval crews and provide spare parts.”

“Both Paris and Rome are big players and will heavily invest in oil and gas exploration in Lebanon through their companies Total and Eni respectively, so there is a strong interest to make sure that Lebanon’s navy is well developed,” the source added.

One of the objectives of the conference — and with the presence of the Choctaw County — is to encourage other countries to step up and help the LAF Navy. “I think what everyone needs to come out of this conference is more clarity on what every country attending is able, and willing, to do to help Lebanon,” explained Nerguizian.

The conference also comes on the heels of a recent French-sponsored conference aimed at supporting the LAF, which has been hit hard by financial pressures and economic collapse.

This is important because while the US is currently footing the lion’s share of extraordinary support to the LAF, there is a great deal other countries can do. “Supporting LAF naval development will reduce the already-broken defense economics of LAF operational costs tied to the Lebanese pound,” Nerguizian added.