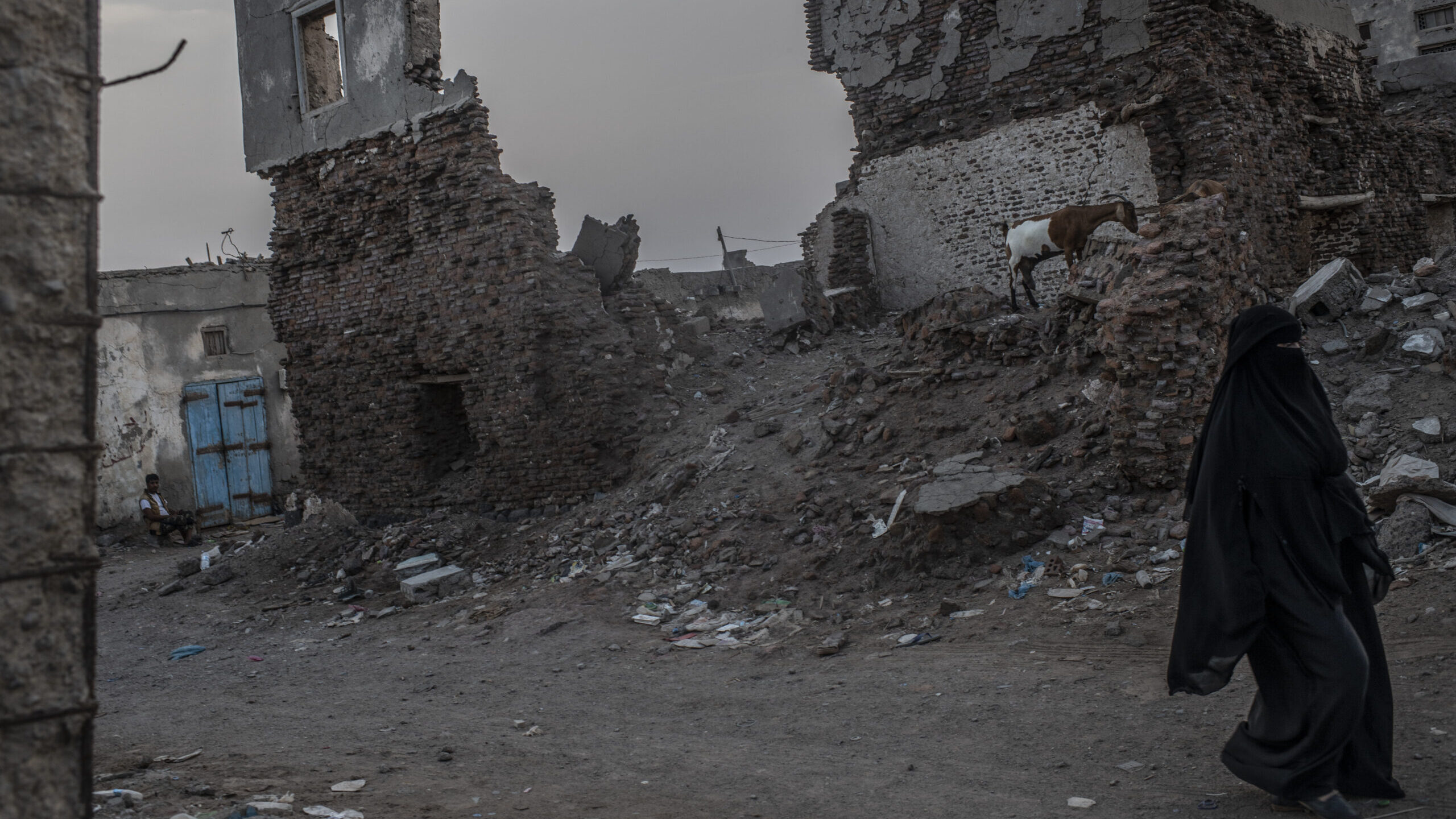 Buildings lay in ruins on September 22, 2018 in Mocha, Yemen. The city was retaken from Houthi rebels in early 2017, part of Yemen’s Saudi-led coalition-backed military campaign that has moved west along Yemen’s coast. (Photo by Andrew Renneisen/Getty Images)

Now that the House has passed its $740 billion version of the 2022 National Defense Authorization Act (NDAA), the Senate will be weighing not just the price tag of the world’s most powerful military but what the act says about America’s priorities. To that end, the Cato Institute’s Jordan Cohen argues in this op-ed that legislators must take the opportunity to support an unprecedented flurry of amendments aimed at stopping American weapons and training from ending up in the wrong hands abroad.

American arms sales and security assistance have been in national news for all the wrong reasons. In the past six months, Saudi Arabia has used US aid and weapons to worsen the humanitarian catastrophe in Yemen, Guinean soldiers trained by the United States conducted a coup, and the Taliban gained access to caches of US weapons previously used by the Afghan National Army.

Unfortunately, these recent incidents are not aberrations. The United States is the world’s largest arms exporter and it has frequently sold weapons to corrupt, undemocratic, and otherwise risky clients.

This worrying pattern might be changing, however, if several amendments to FY22 NDAA passed in the House of Representatives last week make it into the final version of the legislation. The House version of the NDAA represents the largest package of legislation that restrict weapons transfers since the 1990s when Congress passed a series of laws on end-use monitoring of security assistance. A total of 21 amendments in the House version of the FY22 NDAA work to reduce risky arms transfers, which will protect US reputation and security by reducing American culpability for human rights abuses.

One example of this is an amendment by Reps. Sara Jacobs, D-Calif., and Tom Malinowski, D-N.J. This amendment will increase human rights vetting for units receiving counterterrorism assistance, provide human rights training for those units, assess how the support achieves its mission, and most importantly, stop funds for units that commit gross violations of human rights. In other words, it gives more support for the Leahy Laws, which attempt to prevent security assistance from going to human rights abusers. This amendment reinforces the Leahy Laws and adds more funding for training, which solves key flaws in the current system, namely the lack of resources and government support to best execute these laws.

A second way that the House’s FY22 NDAA reduces US culpability for human rights abuses is by restricting weapons transfers to Saudi Arabia.

It is no secret that Saudi Arabia has been using US weapons to conduct its war in Yemen. Between March 2015 and July 2021, the Saudis conducted over 23,000 air raids and leading to over 18,000 civilian casualties, according to the Yemen Data Project. According to Security Assistance Monitor, the United States delivered over $10 billion of weaponry to Saudi Arabia during that same time.

Furthermore, the FY22 NDAA begins to consider risk in the arms sale process. This is something that academic research suggests has not happened since 2001. The United States’ leading customers of weapons since 2009 include clients that are unstable, corrupt, abuse human rights, or all three. These include Saudi Arabia, Egypt, Iraq, Pakistan, Turkey, and the Philippines.

Representatives Susan Wild, D-Penn., and Tom Malinowski, D-N.J., introduced an amendment that attempts to better incorporate these risks into the arms sale decision process. Their amendment creates a reporting requirement on human rights abuses related to arms exported by the top five global arms exporters. This will provide the United States with more information about recipient risk as well as protecting American soldiers and citizens abroad from exported weapons being used by hostile actors.

None of this is to say that the House’s FY22 NDAA is perfect. It only partially restricts the president’s ability to use weapons sales as a tool of foreign policy. The House navigated around bureaucracy to approve $1 billion in funding for Israel’s Iron Dome rocket defense system. Beyond what they voted down, the House NDAA also does not address Congress’s institutional inability to stop sales, which means the president’s authority in this arena is still nearly absolute.

With that said, it is important to not let perfect be the enemy of good. The amendments to the House FY22 NDAA attempt to restrict US weapons sales that have caused significant harm around the world. The amendments that add reporting requirements and restrictions on security assistance should reduce US implication in human rights atrocities and government coups. The amendments that restrict weapons transfers to the Saudi coalition fighting in Yemen will begin to reduce US responsibility for the deaths of thousands of innocent civilians in the war-torn country.

By taking a first step in evaluating human rights before transfers, policymakers in Washington will avoid becoming entangled in conflicts, supporting corrupt governments, and contributing to an increase in terrorism across the globe. To that end, the House’s FY22 NDAA is a good first step to a more safe and responsible US weapons sales policy.

Jordan Cohen is a policy analyst in defense and foreign policy at the Cato Institute and a Ph.D. candidate in political science at the Schar School of Policy and Government at George Mason University.